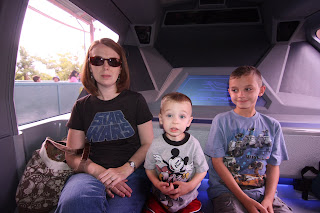 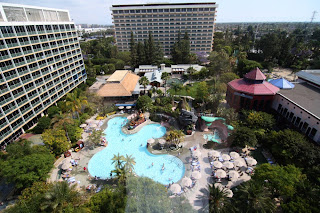 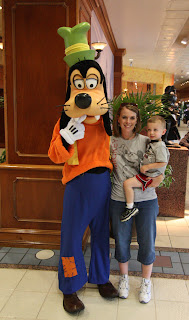 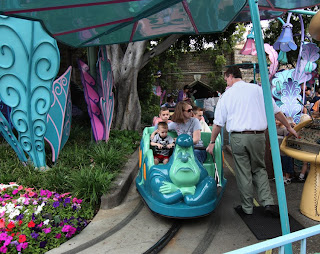 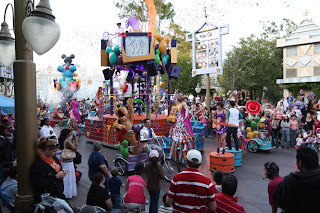 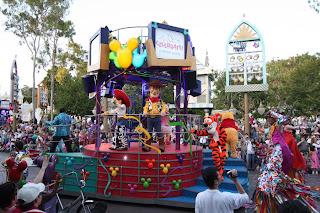 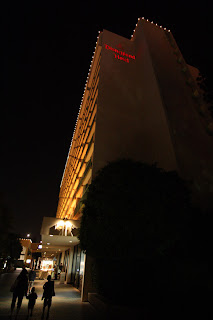 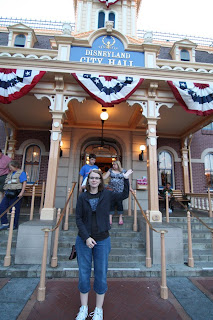 At least that's what we're jokingly referring to it as after a particular sequence of events occurred ever since we entered California. (Note the Star Wars shirt.)

After a long drive from Flagstaff across eastern California, we pulled into Barstow for supper and fuel. We couldn't get fuel. One station was trapped in the 1970s and lacked pay-at-the-pump technology. Next station had pay-at-the-pump, but credit cards weren't working. At the 3rd station, gas was cheaper if a car wash was purchased. Great...we had slaughtered a large portion of bugs with the CX-9, and having a white paint scheme presents an undesirable color contrast for the insect remains. So we waited for the car wash attendant to walk out and try to sell us on some over-priced service. He never emerged. We sped out of Barstow and headed to L.A., vowing we would never return to the town surrounded by nothing.

We arrived that evening (June 8) at the Disneyland Hotel only to be informed that the A/C in our room was kaput. They put us up in a nearby Hilton. Normally, flexibility is a key character quality one must assume when traveling. Things happen and plans change. This was different. Our sons' anticipation regarding the Disney lodging in a Disneyland hotel and connected to the park was about to be shattered. So we weren't being flexible at first. Disney was sold out at all of their hotels that evening. No place to put us except in a neighboring hotel. In exchange, they would pay for that night and refund for our 1st night Disney charge. Furthermore, they upgraded us to a large suite at no charge for the remaining 2 nights.

The next morning, we left the Hilton and drove back to the Disneyland Hotel, hopped on the Monorail, and discovered quickly the reason why people say it takes many days to experience a Disney park: loooong lines. We expected long lines, but not loooong lines.

That afternoon, we decided to head back and check in to the "suite," which is really nice. As we walked into the hotel lobby, Cynde reached for her purse and wallet only to discover she didn't have them! She had left them in the rented stroller that we had turned in about 15 minutes earlier. Her purse also contained our Disney tickets. As she headed back to the park, she had to explain to the gatekeeper why she needed admission into the park without a ticket. The gatekeeper had mercy on her. At the stroller rental station, the employees started to assist with looking for her purse, but a manager intervened and informed Cynde there was nothing they could do, and that she needed to go to Disney City Hall. Cynde was relieved when the lady at City Hall emerged with her purse and wallet, and everything was accounted for.

In addition to the rides breaking (at a higher rate than we expected), the Monorail also breaks. It was conveniently broke after our long day at the park and we were ready to head back to the hotel.

So we walked. En route, we stopped off at the ESPN Zone restaurant--a place the boys had requested we visit for supper. They informed us that no more tables were being seated until after the Lakers game. I so badly wanted to ask, "who are the Lakers?"

We headed to another nearby restaurant: Ralph Brennan's Jazz Kitchen. It offered mostly New Orleans style cuisine. Cynde ordered a filet mignon and I went with the catfish. While ordering her filet, she requested a substitution for the pecan green beans since she is deathly allergic to nuts/almonds.

The restaurant featured live entertainment, and we were seated at the table closest to the stage. So close that Aiden (age 2) discovered he could kick the stand holding the tip jar for the pianist/singer. After the initial kick failed to deliver Aiden's expected result, which I'm certain was a full tumble of cash and coins, Cynde was able to pull his chair away before he applied a harder kick.

After about 45 min and no food, the manager stopped by to apologize. We asked him if he could at least get the kids' food out. They were able to do so. About 10 min later, out came our food. As Cynde cut into her filet, she discovered what medium rare looks like. It looks nothing like the medium well she expected. The waitress took the meat back. The manager later appeared with the longer-cooked filet just as the waitress walked up. As the manager placed the plate in front of Cynde, the manager proudly proclaimed that the steak was not delivered "naked." Indeed it was not. Instead, it was delivered on a layer of pecan green beans. As we explained that she could no longer eat the steak due to it coming into contact with the pecans, the waitress said to the manager, "that's why she chose a different vegetable. She's allergic to nuts." The manager then chastised her in front of us and said, "You didn't tell me she was allergic to nuts!" Cynde interjected and said, "You know what...I'm done. Please don't cook me another steak." As the manager and waitress walked off, still bickering, Cynde looked at me and said, "It's the Disney Curse."
Posted by VisualUniverse at 11:08 PM