Border Patrol checkpoint. The dog didn't detect anything, so they waved us through.
It was a long drive from San Diego to Tucson. Interstate 8 dips down to the U.S./Mexican border several times. The Border Patrol presence was thick. We saw several roadside busts going down, including a van full of people. The border wall/fence was interesting to see. Much of the drive is very scenic with the multiple mountain regions on both sides of the road. At one point, we dropped in elevation from 4100 ft to 2000 ft within about 5 miles. The temperature increased 7 degrees in that short duration. Tomorrow we will try to hit Kitt Peak visitor's center and Pima Air Museum all in one day.

The fence/wall along the U.S./Mexico border. 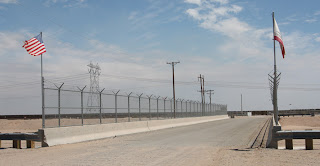 Closer view of the wall with the American and California flags. Cynde was too scared to let me drive across the bridge. There were two Border Patrol trucks parked in position to monitor the bridge.

The West Inn is the hotel we stayed in for 5 nights in Carlsbad just north of San Diego. We picked this hotel because of the close proximity to Legoland and the beach. The hotel was wonderful. All of the staff were very friendly. The hotel is privately owned and they thought of everything. Every night the hotel provided fresh baked cookies and milk. Our evening schedules centered around this snack event. The morning breakfast buffet was well done (much better than most hotels), and the large lodge area allowed for plenty of room to relax.

Posted by VisualUniverse at 10:29 PM